The job of Traffic Director is to answer DNS Queries with the appropriate DNS Records for the location where the query originated. For Example: If your website receives a query from a user in New Hampshire, Traffic Director can answer that query with a record you chose based on the origin of the query and the availability of the DNS records.

WARNING: Making changes to any one Traffic Director object with multiple sessions, either via the API or GUI, may cause unexpected behavior. This unexpected behavior could result in unintentional service changes or the inability to propagate new zone changes. 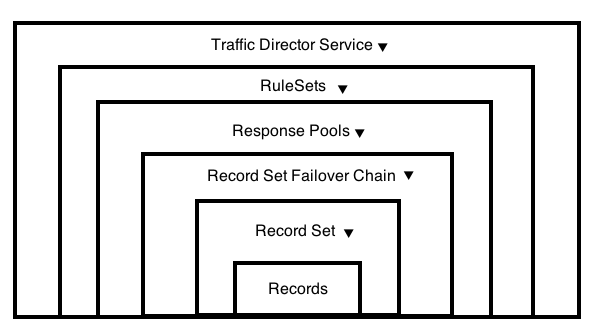 Traffic Director has several components that work together in this hierarchy:

NOTE: Total number of records in a single Response Pool may not be more than 255.

Record Set Failover Chains contain DNS Records (See Managing Records) grouped by record type into Record Sets (See Managing Rule Sets). Record Sets are designed to serve Records that are available (online). They usually contain more than one Record so that if a specific Record is unavailable, another can be served in its place.

Monitors for Traffic Director identify objects on your network to be watched for potential failure. (See Configuring Monitors) If a failure occurs, the monitor a) notifies the designated email address with either a summary or detailed account of the failure, and/or b) updates the Traffic Director to mark associated records as ineligible for DNS responses.